Pharmaceuticals
Antibody Based Therapy to Treat Cancer and GI Related Diseases (No. T4-1640)

A novel therapeutic antibody against MMP-7, with exceptional specificity, for the treatment of aggressive cancers.

Although early programs targeting MMPs (matrix metalloproteins) were largely unsuccessful due to adverse side effects, they remain a viable and highly desirable therapeutic target. The main obstacle in the attempts to target MMPs is the ability to selectively target individual MMPs. The present invention provides highly selective targeted therapy against MMP-7, which is strongly associated with aspects of cancer development such as angiogenesis and metastasis.

In a further development of their previous groundbreaking synthetic metal-protein mimicry molecules, researchers from Prof. Irit Sagi’s lab generated an antibody which exhibits exceptional degree of specificity towards MMP-7 over other MMPs.

Matrix metalloproteins (MMPs), a family of zinc-dependent endopeptidases, are key enzymes participating in remodeling of the extracellular matrix (ECM), and are thus critical for processes such as vascularization and cell migration. Imbalanced activity of MMPs may result in a variety of physiological and pathological processes, predominantly cancer, affecting angiogenesis, tumor growth and metastasis (Figure 1). Accordingly, MMP expression is tied to tumor aggressiveness, stage, and patient prognosis.

MMP-7 (also known as Matrilysin, PUMP-1, or uterine metalloproteinase) has been particularly associated with malignat tumors and is considered to have an important role in tumor invasion and metastasis. Owing to this role are specific expression in epithelial tissues and a broad range of substrates including Collagen IV and X, Caesin, Laminin, Elastin and other members of the MMP family. Among the cancer types in which MMP-7 was implicated, are esophagus, stomach, colon, liver, pancreas, ovarian and renal cell carcinomas.

Several attempts to take advantage of the great therapeutic potential of targeting MMPs failed due to severe toxicities. The basis for this toxicity was found to be poor selectivity towards specific MMPs. It is now recognized that among MMPs, some possess cancer-promoting activities while others tumor-inhibiting functions, underlining the risk of using broad-spectrum MMP inhibitors.

There is therefore a need to re-introduce MMP-targeting (and MMP-7 in particular) programs back to the cancer market. Such therapeutics must offer high selectivity while maintaining the promising therapeutic potential of MMPs. 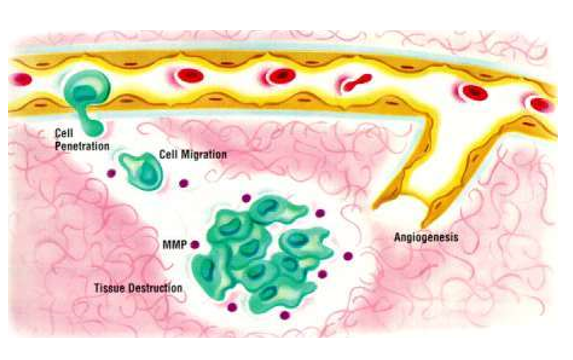 The innovative concept leading to this high selectivity is immunization with both a synthetic metal-protein mimicry molecule, previously developed by the present inventors, followed by the metalloenzyme itself (e.g., MMP-7). The specificity of the resulting antibody (as defined by Ki) is measured to be at least 5-fold higher towards MMP-7 than towards other MMPs.

The present technology is based on a previous invention that was developed in Prof. Sagi's lab, of synthetic metal-protein mimicry molecules that mimic the conserved structure of the metalloenzyme catalytic zinc-histidine complex within the active site of each MMP enzyme.

These molecules were shown to be powerful immunogens in the generation of highly selective MMP antibodies since they recognize both electrical and structural determinants residing within the enzyme active site. The potential of this method to successfully generate MMP-targeting therapeutics was shown for MMP-9/2 inhibitory antibodies in mouse models of inflammatory bowel disease[1].

Sagi and her team now take this invention a step further to achieve even higher specificity. They show that immunizing with the mimicking molecules described above, followed by immunization with the metalloenzyme itself increases selectivity further.

Implemented for MMP-7-targeting, this approach yielded an antibody with a 5-fold lower Ki towards MMP-7 than towards other MMPs (e.g., MMp-2 and MMP-9). 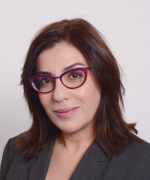