Technology transfer trends at the Weizmann Institute of Science

One cannot predict what scientific discoveries or revolutions will be made in the laboratories of the Weizmann Institute of Science; but whatever they are, Yeda Research
and Development Co. will be there to bring them to market.

“When we satisfy our urge to know, we’re also benefitting humanity,” says Weizmann Institute of Science president, Daniel Zajfman. That explains why multinational companies seek to collaborate
and create long term relationships with Yeda, the technology transfer arm of the Weizmann Institute of Science. These collaborations have resulted in new technologies, from blockbuster drugs to green chemistry innovations.
Scientists at the Weizmann Institute of Science are encouraged to do one thing – follow their own curiosity. The unique multidisciplinary structure of the Institute stimulates research such as that of Avigdor Scherz and Yoram Salomon, a plant scientist and cancer biologist, respectively, who together realized that the light-absorbing properties of chlorophyll could be used to target tumours with light. Their system, named “TOOKAD Soluble®”, has been licensed to Steba Biotech and was recently approved for treating prostate cancer.

Originally established in 1934, the Institute has grown to more than 100 buildings with over 250 independent research groups, but still retains the atmosphere of an intimate, cutting edge, basic science institute. Its achievements include the development of Israel’s first electronic computer, discoveries that led to the development of Copaxone® and Rebif® for the treatment of multiple sclerosis, as well as a franchise covering the combination of chemotherapy and anti-EGFR monoclonal antibodies, which now include Erbitux®, Vectibix and Portrazza. The recent advances in immune checkpoint and Car T-cell therapies for cancer can all be traced to Weizmann Institute research, and new microbiome studies are currently undergoing translation to market. The Institute is also currently pursuing research which may one day lead to innovative techniques for transplanting embryonic tissue, or nanobiological computers that will enable the detection of disease within the body before symptoms appear.

Yeda was founded in 1959 to bring the discoveries of Weizmann Institute labs to market. The company identifies projects with commercial potential, performs initial development work that brings these discoveries closer to market and partners with industry for further development and commercialization of  licensed technologies. Some 1,930 families of patents have been registered by Yeda since its inception, and almost 100 companies have been established on the basis of these patents. Combined with the hundreds of licences, dozens of products in the market place and 25 billion dollars’ worth of sales of Weizmann Institute-based products in 2015, these make Yeda one of the most successful technology transfer organizations in the world.

“One of the unique things about Yeda,”says Amir Naiberg, Yeda’s CEO, “is that we practice modern technology transfer, in which we combine an understanding of science, and knowledge of how and when to partner, with the ability to build novel businesses and invest in promising technologies for long term collaboration.”
Vice president, Mudi Sheves, adds: “We all share a mission and the passion to bring Institute discoveries to market that might,for example, help cure breast cancer or possibly in the future, treat such diseases as Alzheimer’s disease or PTSD.” 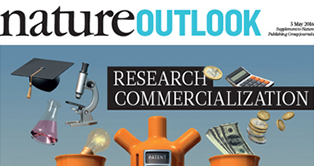