XL-protein from Germany and Yeda, the commercial arm of the Weizmann Institute of Science, have announced the signing of a collaboration agreement for the commercial exploitation of an improved interferon molecule that was developed by scientists from the Institute and from XL-protein. The agreement states that Yeda will also represent the XL-protein scientists and may grant licenses to different companies for the development of applications of this molecule for the treatment of a line of diseases, including diseases of the central nervous system.
One of the possible applications of the improved interferon could be in treating patients with MS (multiple sclerosis), a severe chronic disease of the central nervous system, which causes neuronal communication difficulties, and sometimes paralysis and death. The new improved interferon developed by the Institute scientists is specifically designed to bind very tightly to its receptors. As a result, it may serve as a basis for a very effective future drug.
The drug potential of the new interferon was also increased thanks to the incorporation of XL-protein’s technology, which maintains it for a long period of time in the patient’s blood. This technology is called the PAS system, an acronym for the amino acids which are connected to the drug to prolong its life.
The new improved interferon is called PAS-YNSα8, and can be produced from E. coli bacteria, an inexpensive method certified by the various health authorities. In experiments on culture and on laboratory animals this molecular structure showed a high level drug activity.
In  research published recently in the Journal of Biological Chemistry, the scientists found that the lifetime of the new drug substance in the blood was increased10-fold in comparison to  standard interferon and that use of the PAS method did not harm the efficacy of the biological activity (in culture and in laboratory animals, as stated above). The study was conducted in mice with human interferon receptors operating in their bodies (by genetic engineering). The material protected these mice from an MS-like disease more effectively than interferon-beta, despite the fact that the frequency of the injections was 4 times lower, and the dosage 16 times lower. The research was led by Dr. Daniel Harari and Prof. Gideon Schreiber from the Weizmann Institute of Science.
Prof. Schreiber explained: "Pre-clinical studies (on laboratory animals) show that the material we have developed may be more effective than interferon-beta. In animal experiments, it was found to be safe and did not provoke negative reactions of the immune system. It may be possible to administer the drug at relatively low doses by injection once or twice a month, while today there are MS patients receiving a number of injections weekly. However, of course, we must keep in mind that the experiments are on animals, and we hope that soon it will be possible to proceed to the next stages in the development process and examine the efficacy of the material on humans. We thank Merck Serono for its contribution to the research on the effect of interferon in an MS model in mice." 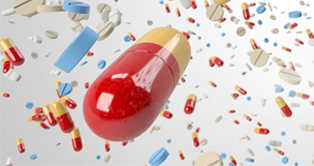