The stakes are high this week as world leaders convene in Paris for the United Nations Conference of Parties (COP21), intended to create a broad multilateral agreement limiting greenhouse gas emissions.

David Banitt, founder and CEO of NewCO2Fuels, is a technologist, not an environmentalist. While solutions to climate change face a number of challenges for science, government and technology, he sees regulation as an opportunity for entrepreneurs to create innovative technologies and companies that are profitable by reducing carbon emissions.

Before co-founding NewCO2Fuels in 2011, the scientist and entrepreneur spent his career working in electro-optics and inspection systems for printed circuit boards and semiconductors. "I started my first company in 1997 and since then initiated and managed five companies," said Banitt. "When environment protection became a global concern, I turned to the cleantech arena and decided to harness my skills to much more valuable, inspiring and meaningful objectives," like developing NewCO2Fuels' carbon-reducing, fuel-replacement reactor.

NewCO2Fuels is an Israeli company backed by renewable-energy firm GreenEarth Energy. The reactor is based on nearly a decade of research conducted at Professor Jacob Karni's laboratory at the Weizmann Institute of Science. The product converts carbon dioxide into a commodity called synthetic gas, or syngas, an amalgamation of hydrogen, carbon monoxide, and carbon dioxide that is used as a combustible fuel, a fertilizer, and a lubricant substitute. "In simple words," said Banitt, "the system extracts one oxygen ion from each molecule. This is a precise reversing the burning process of fuel."

The reactor performs simultaneous, single-step electrolysis of carbon dioxide and water at high temperature and to generate syngas. "The basic element of the product is a reactor, where the carbon dioxide and water are fed with heat, then the syngas and Oxygen are discharged from the reactor. The energy required to drive the process is extracted from waste heat," explained Banitt, "excess heat becomes renewable electricity."

The product operates at a very high temperature, he said, making it extremely efficient, and "profitably sold at market prices."

The NewCO2Fuels syngas product is used by energy-intensive industries, Banitt explained—steel producers, gasification companies, and cement and material refineries—rather than conventional automotive combustion engines. "[The process] enables [companies] to turn waste streams, like CO2 gas and heat, into into valuable product and increase their profits." The opportunity to capitalize on tackling big problems, he said, is an incentive to build technology that has a positive global outcome.

Because syngas converts to energy nearly 30% more efficiently than traditional carbon-based fuel, industrial use of the product could be critical for helping countries meet ambitious emission-reduction goals. In the US alone in 2013 the industrial and electrical sectors accounted for over 50% of total greenhouse emissions. This is in contrast to the 27% of emissions produced by the automotive and transportation industry.

Banitt was attracted to the entrepreneurial and technological challenges and threats posed by global warming, dwindling oil reserves, and pollution. "These are all [problems] of global, immense magnitude," said Banitt. "World population will grow and [people] will demand more energy. Generating new methods to reduce CO2 emission and providing a clean energy source based on renewables is a task that can have a global impact."

"The complexity of the product was by far more challenging than I anticipated," said Banitt. "In almost any of them we challenge the forefront of technology—searching manufacturers around the world and finding just a few, challenging them with difficult tasks, and ... the need to be integrated into one operating system that meets high standards of safety, reliability and performance is critical."

The next step is to deploy several pilot programs with commercial partners. The end game, said Banitt, is to provide an innovative and useful technology package that encourages other companies to fill the market that has emerged from global CO2 emission control. 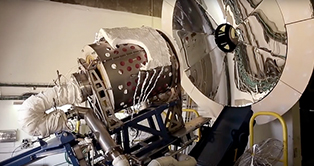