The two most pressing challenges facing humanity are the need to feed the growing population with restricted land and water sources and global warming caused due to high atmospheric CO2 levels. Biological systems for CO2 conversion to organic molecules using renewable-energy-harvesting techniques present a promising approach to simultaneously treating both problems. The lab of Prof. Ron Milo developed a breakthrough synthetic biology approach and engineered bacteria (E. coli) to consume CO2 as a source for their biomass carbon.

The two most pressing ecological challenges of our time are reducing CO2 levels in the atmosphere, which is responsible for extreme weather events and creating enough food for the ever-growing population. In light of the tremendous economic costs of global warming, there is a substantial economic incentive to develop new technologies capable of removing CO2 from the atmosphere. Importantly, today's food supply chain accounts for over 20% of anthropogenic greenhouse gasses emission1. Therefore, there is a growing need for developing a natural and sustainable food source. Biological systems for CO2 conversion to organic molecules present a promising avenue due to their high product specificity and modularity.

Prof. Ron Milo and his team were the first ever to engineer E. coli bacteria to produce all of their biomass from CO2 as the sole carbon source2. Therefore, this technology can address both problems presented above at once: consuming CO2 for potentially synthesizing food3.

Our engineered E. coli strain uses the Calvin cycle for carbon fixation and harvests energy and reducing power from the one-carbon molecule formate (HCOO−), which can be produced electrochemically.

Heterologous expression of non-native enzymatic machinery potentially enables autotrophic growth; however, it does not guarantee that the cell will utilize it as a favorable pathway. To drive the flux toward the desired metabolic pathway, the deletions were implemented by rational design, and evolutionary pressure was used by growing cells in Xylose limited chemostats under continued starvation conditions in the presence of excess formate and CO2, to select cells with reduced dependence on external carbon source. Autotrophic growth was achieved following several months of continuous laboratory evolution and confirmed via isotopic labeling. 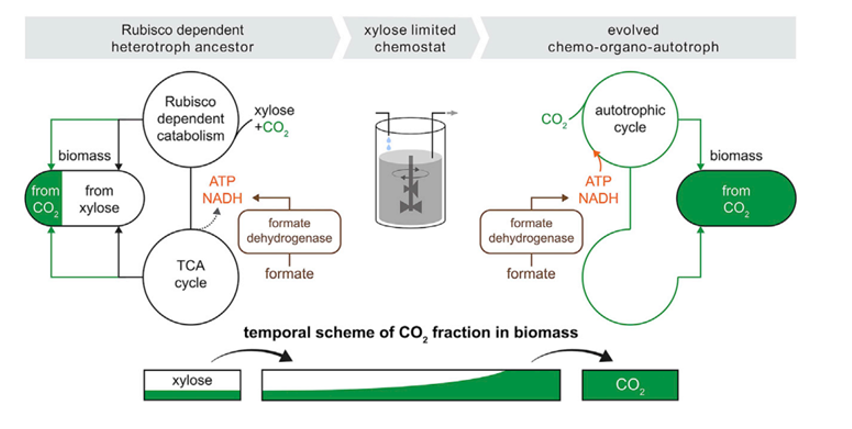 Figure 1: The experimental workflow begins from the left where the E. coli strain is engineered for xylose catabolism (pfkA, pfkB, Zwf deleted; Rubisco, Prk, CA, FDH overexpressed), but is unable to grow in autotrophic conditions. As the limited amount of xylose is consumed in the chemostat, and with an excess of formate and CO2, the cells are under a strong selection pressure to use CO2 as the only carbon source, while using formate oxidation by FDH as the energy source. Evolved clones with a fully autotrophic phenotype were then produced (right), as they achieved a fitness advantage over xylose dependent strains and become the dominant population in the chemostat.

The Milo team has performed the experimental work of generating novel strains of carbon fixing E. coli including characterization both in terms of carbon economy and genomic sequencing to determine the mutations leading to E.coli autotrophy. 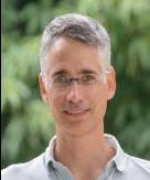