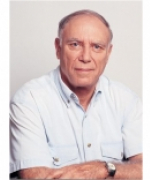 Born in Argentina in 1938, David Mirelman emigrated with his family to Israel in 1949. He received his Ph.D. from the Weizmann Institute of Science in 1968, and then spent two years as a Research Associate at Tufts University Medical School in Boston. In 1970, Prof. Mirelman returned to Israel, where he joined the staff of the Weizmann Institute's Department of Biophysics (now Biological Chemistry). He was appointed Associate Professor with tenure in 1976, and Full Professor in 1985. Sabbaticals include periods at the University of California at Berkeley, Harvard University, and as a Fogarty Scholar-in-Residence at the National Institutes of Health in Bethesda, Maryland. In 1987, Prof. Mirelman was appointed Chairman of the Board of YEDA Research and Development Company, Ltd., which commercializes the inventions of Weizmann Institute scientists. In 1993, when the post of Vice-President for Technology Transfer was established, he was nominated to be in charge of all aspects of technology transfer of Institute research, in addition to serving as Chairman of Yeda. At the end of 1998, he completed his term of office in both these posts, returned to his laboratory full-time, and at the same time was appointed to serve as Dean of the Institute’s Faculty of Biochemistry, a post he held until January, 2004. He also headed the Weizmann Institute’s Y. Leon Benoziyo Institute for Molecular Medicine until January, 2004.

Prof. Mirelman's research interests lie in the field of molecular biology, within which he is especially interested in the interactions between microbial pathogens and mucosal cells in the human intestinal tract. His studies of the molecular biology of the amoeba parasite (Entamoeba histolytica) are directed towards understanding the molecular mechanisms of virulence, differentiating between pathogenic and non-pathogenic forms, and investigating the host response and effects of the associated microbial flora. Prof. Mirelman has also developed a novel delivery system for a potent anti-amoebic drug, and is currently attempting to develop a vaccine using a genetically modified and non-virulent amoeba. In recent years, he has also become interested in the mode of action of allicin, the biologically active molecule of garlic, and its application against a number of human diseases, including cancer. Prof. Mirelman has published over 180 scientific publications in international journals, and is the recipient of a number of research prizes. He is the incumbent of the Besen-Brender Professorial Chair of Microbiology and Parasitology.