The serum metabolome contains a plethora of biomarkers and causative agents of various diseases. They are known to be modulated by various genetic and environmental factors such as the gut microbiome, nutrition, and lifestyle. However, most of the serum metabolites and their determinants are still unknown. The group of Prof. Eran Segal characterized the serum metabolome of a well-phenotyped human cohort using mass spectrometry. Using this database, the team developed machine learning algorithms to predict metabolite levels in held-out individuals based on their host genetics, gut microbiome, clinical parameters, diet, lifestyle, and anthropometric measurements. The team developed a method to predict the serum metabolome non-invasively, based on the subject’s microbiome profile (using stool samples) or dietary habits. The method could be applied to predict diseases associated with specific blood metabolites (i.e., metabolic disease, cardiovascular disease, and kidney disease). It can also provide recommendations for dietary changes, probiotics, or antibiotics consumption to alter the blood metabolome and improve a subject’s health.

The blood contains many small molecules called the serum metabolome, which are either produced by the body or taken up from the environment. Some of these metabolites are known as predictive diagnostic biomarkers and, in some cases, even as causal agents in disease development. For example, high cholesterol levels lead to plaque accumulation in blood vessels, increasing heart attack and stroke risk. Therefore, high blood cholesterol is both a diagnostic marker for cardiovascular diseases and a therapeutic target for drugs such as statins. Similarly, high blood sugar is a well-known marker for type II diabetes. Previous studies indicated that human genetics account for less than 7% of the serum metabolites, suggesting major contributions from environmental factors. Additional factors that were previously shown to actively modulate serum metabolites are the gut microbiome, nutrition (dietary patterns such as red meat, whole-grain bread, tea, and coffee), and smoking.

Despite the wealth of potential biomarkers and therapeutic targets found in the blood, most of the serum metabolites and their determinants are still unknown.

Based on their findings, the team developed a method to predict the quantity of metabolites in the blood based on a subject’s gut microbiome profile or food consumption habits.

Prof. Eran Segal and his team measured the levels of 1,251 metabolites (using mass spectrometry) in serum samples from a unique and deeply phenotyped healthy human cohort of 491 individuals2. They applied machine-learning algorithms to predict metabolite levels in held-out individuals based on host genetics, gut microbiome, clinical parameters, diet, lifestyle, and anthropometric measurements and obtained statistically significant predictions for more than 76% of the profiled metabolites (Figure 1). Diet and gut microbiome had the strongest predictive power, as each of them independently explains a wide range of biochemicals. The team validated their microbiome-related predictions by showing a high replication rate in two geographically independent cohorts. To support the causality of these predictions, the team showed that some metabolites that were predicted to be positively associated with bread, indeed increased in levels following a randomized clinical trial of bread intervention.

Therefore, the present technology offers a method to predict blood metabolites based on a subject’s microbiome profile or diet. Moreover, the predicted metabolome can be used for diagnosing diseases that are associated with specific metabolites, such as metabolic disease, cardiovascular disease, and kidney disease. This method can also be used to aid in altering the blood metabolite composition of a subject, either by dietary recommendations, probiotic or antibiotic consumption.

Prof. Segal and his team created machine learning procedures for predicting blood metabolites profiles based on microbiome or food consumption habits. They validated the robustness and reproducibility of the models based on gut microbiome data by applying them to two geographically independent cohorts. As a proof of concept for clinical relevance, the team showed that metabolites that were predicted by their model to be positively associated with bread consumption were found to increase after a randomized clinical trial of bread intervention (Figure 2). This demonstrated that the interactions observed by the model could be causal and can be used for clinical assessments. 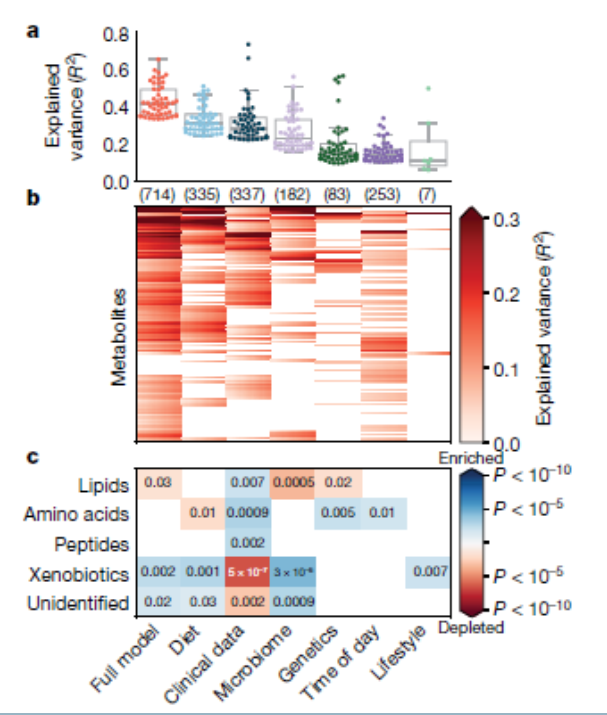 Figure 1 - Diet, gut microbiome, genetics and clinical data predict the levels of most serum metabolites. a, Box and swarm plots (centre, median; box, interquartile range (IQR); whiskers, 1.5 × IQR) showing the explained variance (EV; R2) of the top 50 significantly predicted metabolites (when available) of each feature group. b, Heat map with colour gradient from left to right corresponding to the 95% confidence interval for the EV, for each metabolite by every feature group. The number of metabolites per group is shown in brackets. c, Enrichment of metabolite types in the predictions by each feature group. Only significant enrichments are shown. Exact P values are written in each cell. 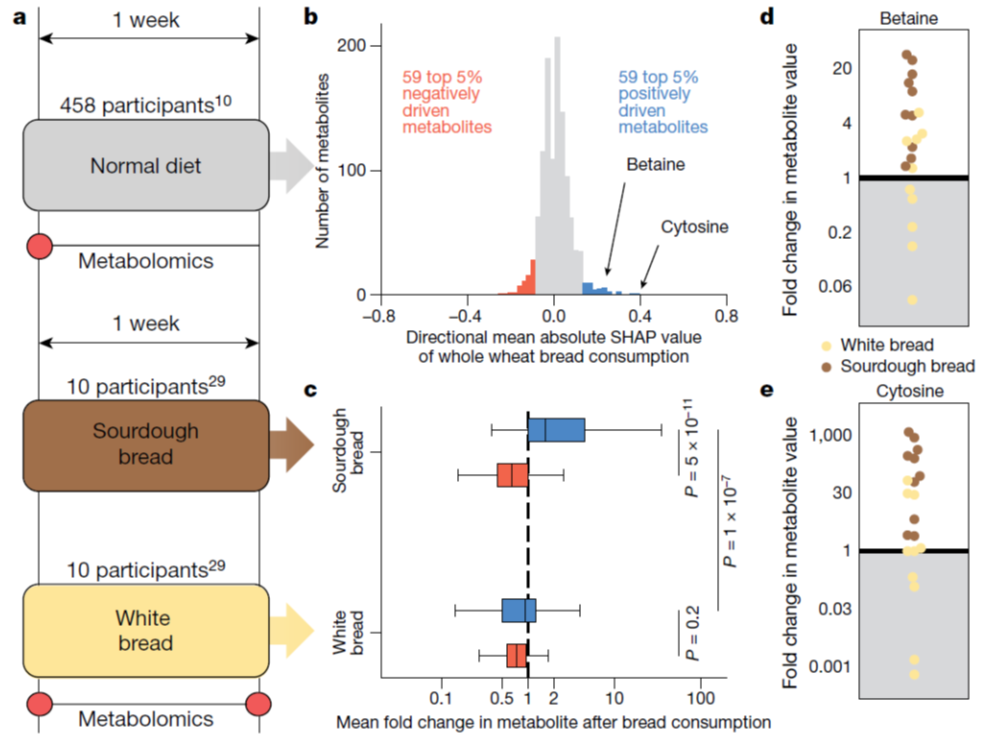 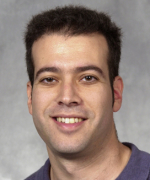 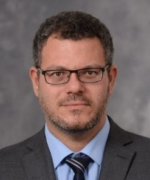