An innovative method for treating diseases associated with dysregulation of collagen fibers in the extracellular matrix (ECM), such as cancer and fibrosis, by targeting LOXL-2.

ECM disruption is associated with many pathological conditions, such as various cancer types and tissue fibrosis, and also correlates with high tumor malignancy. Therefore, controlling ECM composition and morphology is considered a potential treatment for cancer and other ECM-associated diseases, such as liver fibrosis. Presently, there is no therapeutic agent which can manipulate ECM properties for such types of diseases, and therefore a pressing need exists for ECM-modulating agents for the treatment of collagen-associated pathologies.

The team led by Prof. Irit Sagi has developed a monoclonal antibody (mAb) which can be targeted against the enzyme lysyl-oxidase like 2 (LOXL-2) - a major ECM regulatory enzyme that modulates collagen structure. LOXL-2 is known to be expressed in numerous cancer types, and has been shown to be associated with enhanced cancer progression and metastasis. Likewise, LOXL-2 inhibition is associated with reduced metastasis and improved clinical outcome. Subsequently, this new anti-LOXL-2 mAb could provide a useful tool to treat cancer development, and possibly other ECM-related pathologies.

The Sagi group initially screened for an anti-LOXL-2 mAb that would differ from previous anti-LOXL-2 mAb iterations that bind far away from the active site. The Sagi mAb targets the active site of the LOXL-2 enzyme and subsequently leads to a modified ECM. The team discovered that one of the clones, GS341, interrupted the uniform alignment of collagen fibers in the ECM without effecting its composition.

LOXL-2 is expressed not only by resident ECM-inducing cells but also by aggressive malignant cells. Therefore, the Sagi group used MDA-MB-231 - the LOXL-2-expression triple-negative (TNBC) breast cancer cell line - to test the effect of an altered ECM structure on the cancer cell line behavior. They found that inhibition of the LOXL-2 enzyme and subsequent loss of collagen cross-linking led to a disruption of ECM topography. Consequently, MDA-MB-231 cells had modified adhesion, morphology, and migration on the altered ECM. In addition, the invasion of cancer cells into the commercial collagen-based matrix was significantly reduced as a result of GS341 treatment.

Following these results which implicated that LOXL-2 targeting can impede cancer development, the team further tested their LOXL-2 mAb in vivo. MDA-MB-231 cells were injected into the mammary fat pads of immunocompromised SCID mice. After 3 weeks of tumor establishment the mice were injected with GS341 for 4 weeks. This treatment, as shown in the figure below, resulted in decreased tumor size (A) and lung metastasis, reduced proliferation (B) and increased tumor fragility (C). These effects also correlated with the disorientation of the fibrils within the tumor as was shown in vitro. These results suggest that LOXL-2 inhibition indeed alters ECM structure and inhibits several aspects of cancer development. 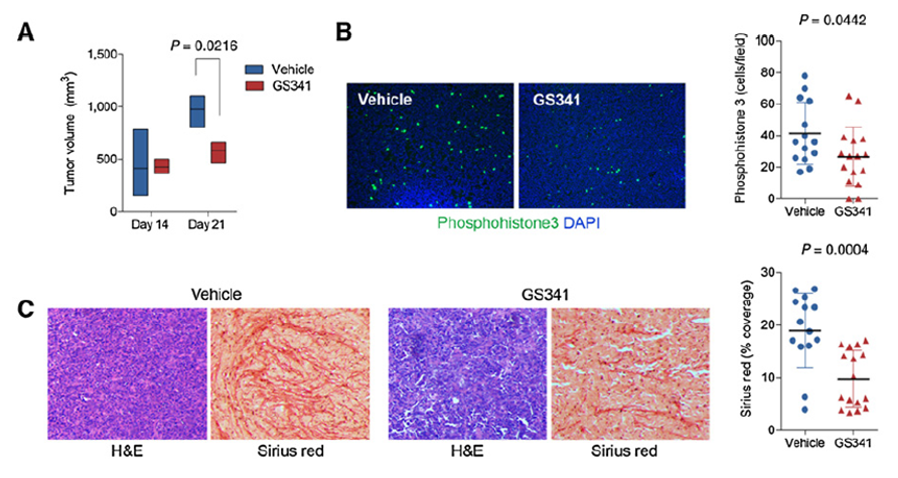 The group of Prof. Sagi tested the anti-LOXL-2 antibody both in vitro and in vivo. The in vitro work showed that the GS341 antibody interfered with collagen cross-linking in the ECM, resulting in a reduction in tumor cell proliferation, migration, and invasion. The beneficial effects of LOXL-2 inhibition on cancer progression was also demonstrated in vivo, as mice xeno-grafted with triple-negative breast cancer and treated with anti-LOXL-2 exhibited disrupted tumorigenic collagen structure, which correlated with reduced tumor growth. The Sagi group has also shown results in mouse models injected with CCl4 to simulate liver fibrosis. By administering their anti-LOXL-2 mAb they were able to attenuate fibrosis and stimulate the regeneration of tissue. 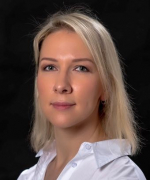